Cymatics, the study of wave phenomena, is a science pioneered by Swiss medical doctor and natural scientist, Hans Jenny (1904-1972). For 14 years he conducted experiments animating inert powders, pastes, and liquids into life-like, flowing forms, which mirrored patterns found throughout nature, art and architecture.

All of these patterns were created using simple sine wave vibrations (pure tones) within the audible range. So what you see is a physical representation of vibration, or how sound manifests into form through the medium of various materials.

Dr. Jenny's methodology was meticulous, well documented, and totally repeatable. His fascinating body of work offers profound insights into both the physical sciences and esoteric philosophies. It illustrates the very principles which inspired the ancient Greek philosophers Heraclitus, Pythagoras and Plato, on down to Giordano Bruno and Johannes Kepler, the fathers of modern astronomy.

These cymatic images are truly awe-inspiring, not only for their visual beauty in portraying the inherent responsiveness of matter to sound, but also because they inspire a deep recognition that we, too, are part and parcel of this same complex and intricate vibrational matrix.

Hans Jenny was building on the earlier work of Ernest Chladni.

Ernest Chladni was a German physicist living in the eighteenth century. Chladni showed how sound waves create patterns in sand sprinkled on a vibrating metal plate. He clamped a round metal plate underneath its center and drew a violin bow vertically along the rim of the plate.

He found that different musical tones would cause the sand particles to move into geometric patterns resembling the mandalas used in eastern spiritual traditions. The shape, diameter, thickness, density and rigidity of the plate would determine the shape of the sand patterns.

When sand is scattered on the metal plate, see figure one far left, then notes of different frequencies are produced by bowing the edge of the plate at different places and holding the edge at others. In figure two from left to right we see the patterns formed when the bow created a frequency of 1200Hz, 880Hz and 2760Hz.

Hans Jenny spent years conducting experiments to discover the effects of sound waves on materials such as glycerine, mercury, gel, liquids, powders and iron filings. Jenny used modern technology to construct a ‘Tonoscope’, an instrument which would produce a picture of the patterns sound creates in these different materials.

Jenny would send electronically produced sound through oscillating crystals to vibrate the metal plate on which different materials were placed. Jenny called his study ‘cymatics’, from the Greek word ‘kyma’ which means ‘wave’.

Jenny found that when the volume of the sound was increased this caused turbulence and eruptions in the materials. Iron filings when vibrated with sound would resemble mountain ranges forming or waves breaking. Many of the patterns created by the sound resembled the cell structures of plants and animals.

Jenny came to the conclusion that each individual cell generates its own sound, groups of cells also generate their own sounds, as do the organs of the body. These sounds are harmonically related to each other. Indeed the entire human body has its own sound made up of all the sounds of its cells, tissues and organs.

In figures three and four we see the effect of pure tones on sand placed on a metal plate vibrated by a loudspeaker unit fixed under the plate. From left to right, from the top downwards we see the patterns formed by the frequencies 230Hz, 865Hz, 4500 Hz, 7500Hz, 9500Hz and 10,000Hz. 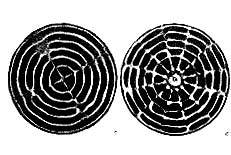