With Chrys Blanchard and Resonant Collective 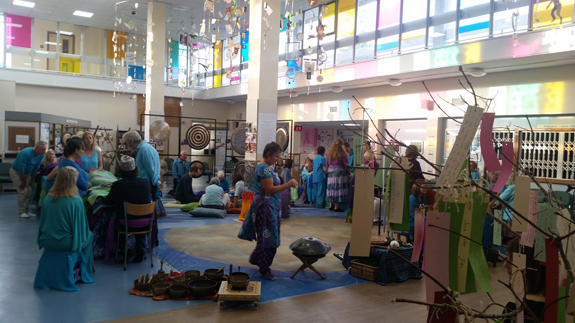 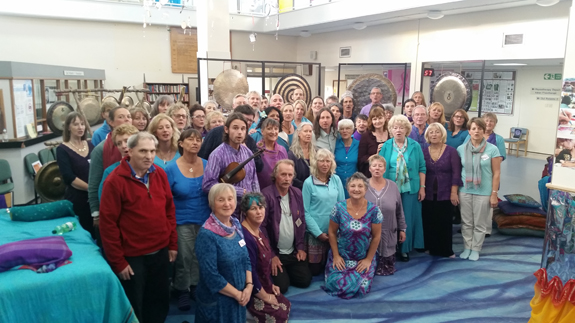 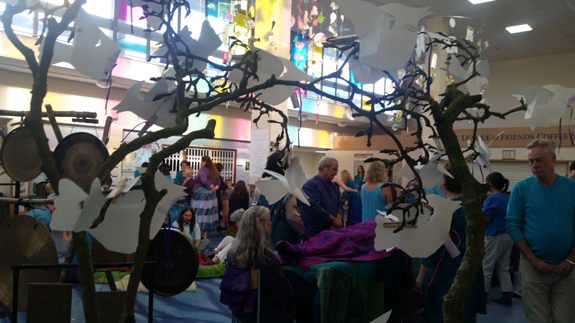 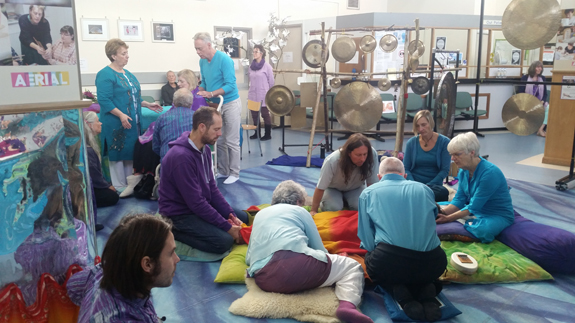 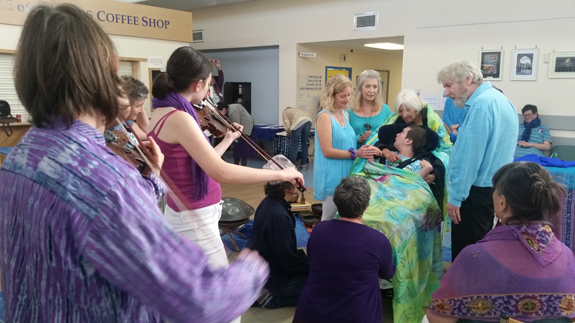 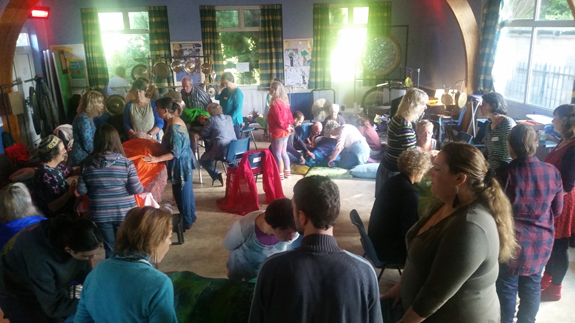 The eighth annual Soundscape at Abergavenny's Nevill Hall Hospital took place on Sunday 16th October and was a moving and beautiful success touching the hearts of the participants, patients and local community. Soundscape is a healing and deeply profound musical experience created through sequences of evolving and living music made up from both predetermined cues and random creation of free flowing harmonics and improvisation which makes each section and performance entirely unique. The overall experience is also a visual one conveying ideas and themes through movement and sound.

The Soundscape is created by a collective of people with interweaving vocals and resonant instruments directed by the skilful and encouraging Chrys Blanchard, who is also a tutor for the College of Sound Healing. The performance is made up of cycles each culminating in vocal sound baths that are offered free to patients at the hospital who would like one and to members of the public. Each cycle of the performance brings new harmonies and revelations and overall it is a fantastic, uplifting and heart warming way to spend a Sunday afternoon that promotes well being and brings together the community in a beautiful way. Most wholeheartedly recommended in every way.

Soundscape is a healing and deeply profound musical experience created through sequences of evolving and living music The stresses and strains that we all carry with us from day to day and which can be exacerbated by having a loved one in hospital, start to melt away when met by the gentle and soothing sounds created by the group.

The opening section began with Chrys playing a 'hang,' a most unusual and much sought after instrument, which to the uninitiated looks like two woks stuck together or a flying saucer. The sound is reminiscent of a steel drum but with a mellower sound. It gently takes you into a relaxed state as the group moved into the first vocal section.

The vocals are wordless, using the pure sound of open vowels, a powerful technique in sound therapy. When a large group combine to sing like this it has a powerfully stabilising effect on all concerned. Visitors to the hospital who 'happened' on the event unexpectedly, were visibly moved by the experience. In this heart opening state a deeper healing becomes possible.

A team of 'ushers' who are experienced with the effects that sound can have on people, take care of the visitors coming into the space. For most people the effects of the sound are feelings of relaxation.

The sound cycle incorporates something called a 'Gong Bath.' A vast array of gongs of all shapes and sizes, recognised for the therapeutic benefits of their sound frequencies, are played. The 'journey' through sound travelled from the low powerful tones of an Earth Gong to the vibrant high frequencies of Symphonic and Wind gongs.

You felt like you were listening to the sounds distant thunder, playful wind, huge waves rolling and crashing on the shore, the sound of dolphins and whales, and celestial choirs! The whole effect was of having every cell in your body cleansed and energised. The sounds were so relaxing that it was possible to drift off into a dream state. Some people commented afterwards that it took them to such a dream like state that it felt as if they had had a good quality sleep!

There was an enchanting section of sound made by magical instruments that sounded like birdsong, called ‘wah wahs’! Other small gongs, bells, singing bowls and temple bells joined these to create a light hearted and joyous element contrasting beautifully with the deeper gong sounds from the previous interlude.

Resonant Collective once again filled the room with more vocal sounds producing the most otherworldly of sounds called A technique which involves singing a single note which sounds more than one pitch. The mysterious sounds seemed to swirl around above our heads. These harmonics are also reputed to have a highly therapeutic effect on the body and sound therapists can train for many years in order to recreate them. They are used by many ancient cultures and tribes in their own sound healing techniques.

There were a few bedecked treatment couches dotted around the 'set' decorated in vibrant greens and blues. At certain points visitors could choose to lie on one of these as five or six vocalists gently sang in 'surround sound' to give somebody a chance to be personally to be bathed in sound.

Those experiencing the 'sound bath' visibly relaxed, some lightly snoozed while others released some tears as their tensions slowly eased away. It can be a surprisingly moving experience. These are experiences we don't usually have in our busy day to day lives. They are simple but so profound.

Chrys has expressed her desire to allow this work to develop and so although this is the last Soundscape planned for Abergavenny at present, the project will 'take wings' and Resonant Collective will be creating 'good vibrations' in other parts of the UK in the future as well as developing various projects locally.